Official forum of apterous.org, the website which allows you to play against other people over the Internet.
Post Reply
4 posts • Page 1 of 1


Player/Team Assignations
Sorry for the fact that this is taking fucking ages, but hey, at least what with starting way after the World Cup Proper finished it doesn't feel like we're working to a particular deadline (other than 2022, perhaps)...
We finally have our 32 confirmed entrants (special congratulations to those who got through qualifying), all teams have been assigned as per the grid below. 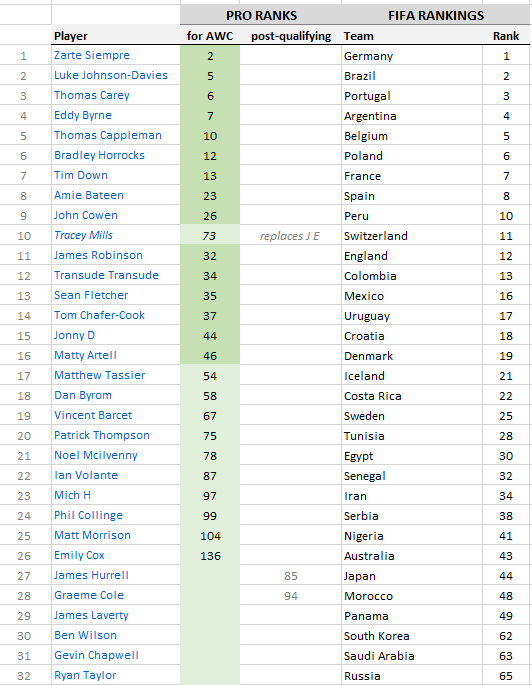 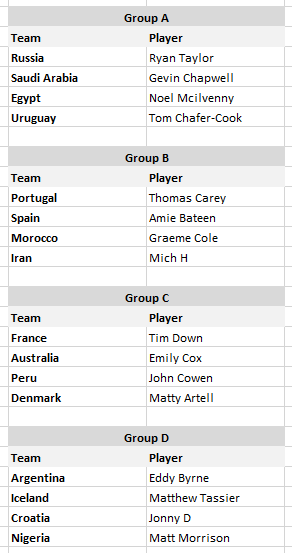 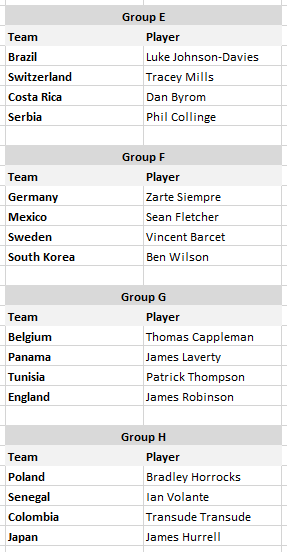 Each team will play each other team in their group once.
Top two teams in each group will progress to the knockout stage.
Tied points separated by goal difference, then goals scored, then other stuff if still required.


Beyond Group Stage
The knockout stage of course matches that of the official World Cup - https://en.wikipedia.org/wiki/2018_FIFA ... ge#Bracket


apterous Gameplay (for Group Stage)
It's the usual AWC format of LLNLLLN Winners Only scoring (best of 1).
The score at the end of the 7 rounds is the score that goes into the group stage league tables.
So if the score after 7 rounds is say, 4-4, this is a 4-4 draw - apterous no longer requires the game to be finished.


Photos
All confirmed. Thanks.

Also managed to spot the fuck up I made adding the fixtures on apterous before Zarte spotted it for me, so that's good.
Top

Group B is tasty. Poor Mich, she's a decent player but will do well to score a point!
"And PANTIES, thank you for that, that cheers us up enormously" - NH
Top
Post Reply
4 posts • Page 1 of 1

Users browsing this forum: No registered users and 6 guests