All discussion relevant to Countdown that is not too spoilerific. New members: come here first to introduce yourself. We don't bite, or at least rarely.
Post Reply
14 posts • Page 1 of 1

Here I share some analysis (with help from Rob Foster) of how much effort one has to put in to progress from complete n00b to letters
God.

Suppose we have a person called Alice. Her lexicon starts as completely empty, but she can learn words consistently with perfect recall. That is to say: (This makes her a bit like Apterous Sponge)

Suppose Alice has access to a copy of the Countdown lexicon sorted in a way optimized for efficient learning: Some Stats

The full Countdown lexicon of around 160K (need to get citation for that) is reduced to around 89K words. Most of that saving is due to wiping out anagrammatic sets, and then you get extra savings from words that are impossible to come up because additional vowels would always make a longer or equally long but more likely word to come up (e.g. CANTER) and you also have words like PIAZZA which can never come up because there is only 1 Z in the letter pack.

So if Alice goes about learning the lexicon in this efficient manner, how will her letters max go up as she progresses through the lexicon? here's the graph up to 90%: 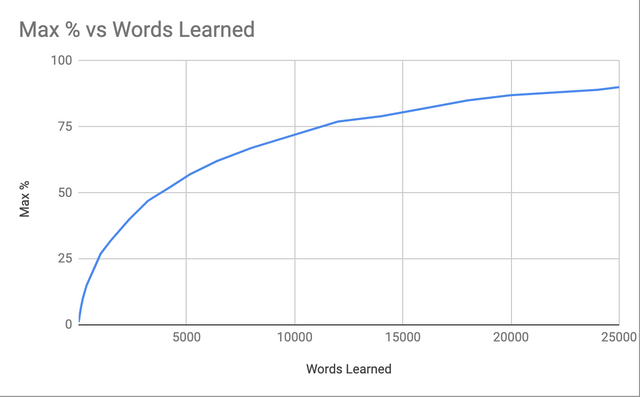 Interesting is that the progression looks almost logarithmic

For Alice, to gain each successive letters % point it becomes increasingly harder. She gets diminishing returns.

What about the real world

Let's look at the superstats letters graphs for some players who have got to God level (>80% maxes).

Probably my favourite graph of them all. A player who started just under 10 years ago as a complete novice, has continued to play for most of those ten years showing the logarithmic growth. Also fun to see that this player wasn't deterred by the dictionary update around 1700 days ago. 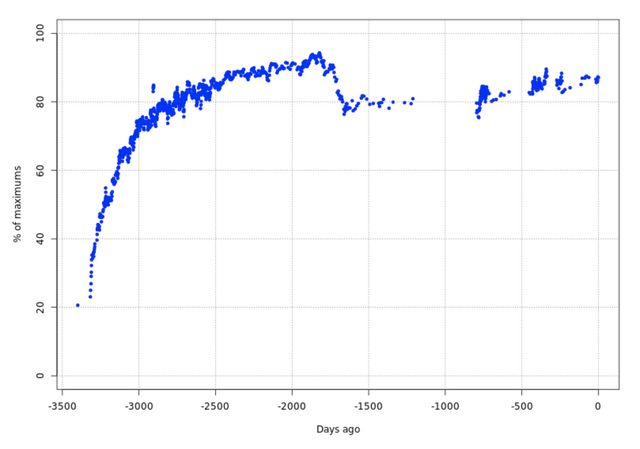 A player who joined 11 years ago as a rookie and has pretty much stuck around making consistent progress ever since with growth that also looks logarithmic. A notable period of absence around 1700 days ago coinciding with the big dictionary update. My bet would be that this player got fed up around that time and needed a bit of time off. Overall a much quicker recovery from the dictionary update than player 1. Perhaps this player studied high probability word lists of the new words, whereas player 1 was happy yo just plod along on apterous and pick things up as they came along? 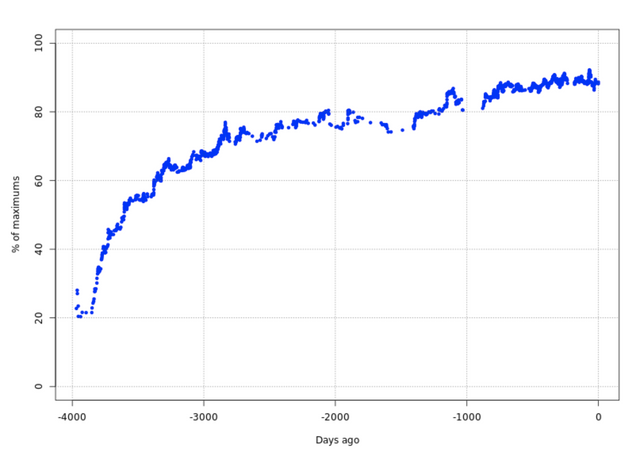 Player 3
A player who joined 4 years ago, already as an intermediate. Steady progress to God level in about 2 years and then diminishing returns since. I wonder was this player just naturally very good when they joined or did they have a different account first? I find either equally plausible. The think I like about this graph is that this is the only example I could find of a God level player who joined after the dictionary update. 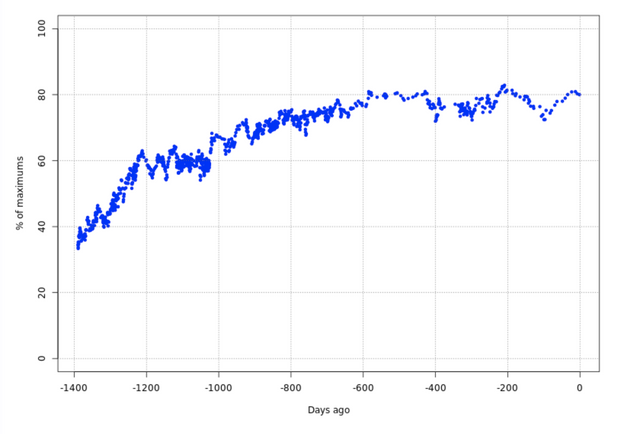 A steady progression into a very solid player for player 4. I really like the consistency in this one. I'd guess they've plugged away at apterous for years and gotten pretty darn good from it. It looks like their growth has been minimal in the past three years though. Maybe they need to start drilling word lists if they want to get to the dizzying height of God level. 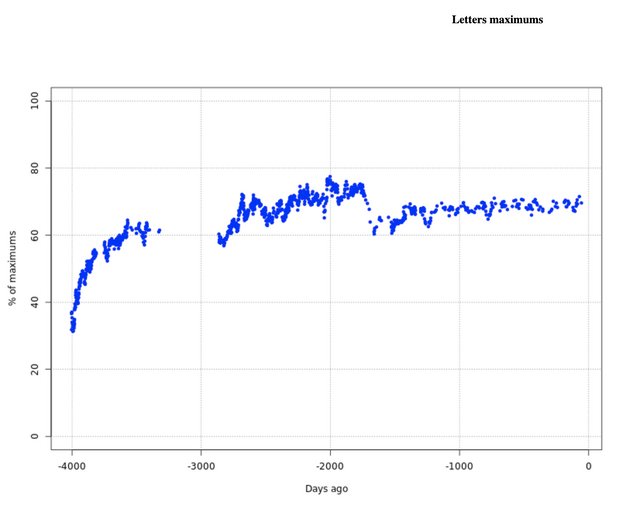 Player 5
Another standard logarithmic progression and 1700 day dip for a long standing player who reached an impressive standard. I'm not quite sure this player is God tier either, but if they came back and played for another couple of years as much as they used to I have no doubt they could get there. 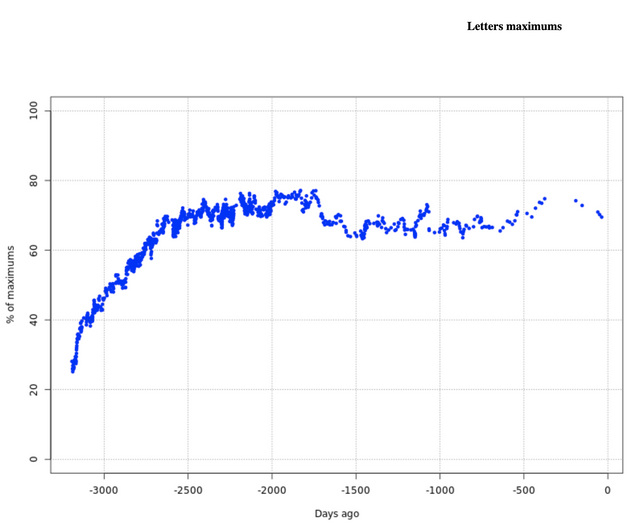 Conclusion
I had quite a bit of fun doing this and hope it triggers some interesting discussion. There's loads of data out there, and probably quite a bit of stuff that disagrees with the hypothetical model a lot less. People are imperfect and erratic and that will lead to many different shapes of graphs. Points I would say:
Top

Good stuff. Interesting that maxes are such a good proxy for overall performance.
Top

But yeah this is bloody brilliant.
The forum's resident JAILBAKER, who has SPONDERED several times...
Top

At least, this is true under the (completely false) simplification where each word appears as a max with fixed probability independently of all other words, and with the assumption that, apart from the head and the tail, most words' probabilities fall in a fairly narrow range.
Top

Sam Cappleman-Lynes wrote: ↑
Sat Oct 17, 2020 4:56 pm
I think the graph is probably closer to something like 1 - k^n for some k slightly smaller than 1, rather than something like log(n).

At least, this is true under the (completely false) simplification where each word appears as a max with fixed probability independently of all other words, and with the assumption that, apart from the head and the tail, most words' probabilities fall in a fairly narrow range.

By the way, bonus points for those who can correctly identify the graphs above.
Top

Players 1, 2 and 3 are Jack Worsley, Rob Foster and Elliott Mellor. Working on the others!

The list does heavily favour words with lots of vowels, which is then only useful if you or your opponent pick 5 vowels a lot. I think because a given selection with 5 vowels is more likely than similar 4 vowel selections, as there's only 5 vowels to choose from rather than 21 consonants, so maxes for those selections are more useful.
Top

Nice work. I don't have superstats, but I'd be on this God list otherwise.
Top

I only simulated 10000 rounds and yeah 3 4 or 5 vowels were with equal probability.
Top

And the moral of this story...

Interesting to see my stats compared to those above: the dictionary update caused me trouble, but recent incentive has helped me approach sixty percent for the first time at least.

Ian Volante wrote: ↑
Sun Oct 18, 2020 12:40 pm
Interesting to see my stats compared to those above: the dictionary update caused me trouble, but recent incentive has helped me approach sixty percent for the first time at least.

Mine's weird - brief peak to 60% rapidly returning to normal! I've a feeling that might have coincided with my self-imposed 'dry July'

Users browsing this forum: No registered users and 8 guests